December is of course, when we celebrate Christmas and recall the amazing love of God who sent His son on earth to redeem and save us. I want to share with you a story that I observed recently. About nine or ten days ag I visited a family for dinner. The family consists of a grandmother and her two grandchildren. The boy is about 13 and his little sister is 6. We had a very nice dinner and afterwards the grandmother was in the kitchen washing up and putting away dishes.  There was a door from the kitchen to the family room where I was sitting, carrying on a conversation through the doorway with grandma.  The little girl whose name was Genevieve, was sitting on the floor in front of me.  She whispered to me: “Stay near the door and keep an eye on grandma and don’t let her come in!  I want to make a gift for her ”  How exactly I was supposed to prevent grandma from coming into the family room was not very clear to me, but I nodded my head to the little girl.

Now all she had was a little box, not much bigger than a match box.  But she had three big sheets of wrapping paper.  She put the little box in the middle of  one of the sheets and started to wrap it around the box.  She told me the box was a ring box in which grandma could keep her rings.  When she had folded the sheet again and again around the little box, she asked me to pass her the scotch tape and the scissors.  “You are very slow, Father” she said at one stage.  As a  matter of fact, she bossed me 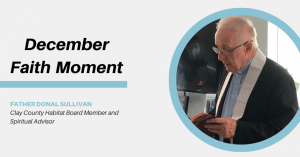 around in a way that I had not been bossed the whole year!

The three sheets of wrapping paper went around that little box.  It was extremely bulky when it was finished, layer upon layer of Christmas paper covered by scotch tape and with the empty ring box inside.  When operation ring box was complete, she ran into the kitchen and presented the bulky package to her grandmother.  Grandma dried her hands and came into the family room.  Genevieve watched with increasing interest, as grandma, showing suitable excitement and anticipation, undid the package down to its very core.  And when grandma said “oh, that’s beautiful–thank you very much” the little girl jumped up and down with excitement and I felt that her Christmas was made!

Now, if you want to insist that there was nothing in that little box, you would be very wrong!  You would be very wrong indeed!  First of all, that little box was full of love!  And the little girl was reminding me that Christmas was all about love!  At Christmas we are reminded that God so loved the world that he sent his only begotten Son to us as an infant in human form to save us.  The second thing that Genevieve was doing was reminding me that Christmas was about giving.  “For a Son has been born to us, a Son has been given to us”! (Isaiah 9.5) And I could see from the way she jumped up and down excitedly that the giving of this package to her grandma meant all the world to her!  Thirdly, she was reminding me of the thoughtfulness, the sensitivity, that should be a feature of family life at Christmas and throughout  the year.  It makes us sad to think that any family life would be saddened by one member’s selfishness, or boorishness, or meanness or bad humor!  Christmas does indeed, bring the best out of all of us.  I have been thinking what a world we would have if we all could keep that up the whole year. (I don’t mean the gift giving part, of course). I mean the love and thoughtfulness for those around us.

My thoughts go back again to that little girl last week, who with her simple actions, reminded me again of the meaning of Christmas.  Three things: loving, giving and thoughtfulness. It is amazing really, isn’t it, to think of all the things you can fit into a small little box, even if you are only six years old.  We read in the Gospel that Mary wrapped the infant in swaddling clothes and laid him in a manger. (Luke: 2. 7).

Get the latest news from Clay County Habitat for Humanity. Subscribe to our email newsletter: